MALAYSIA GETS A NEW GOVERNMENT, BUT RACE STILL RULES 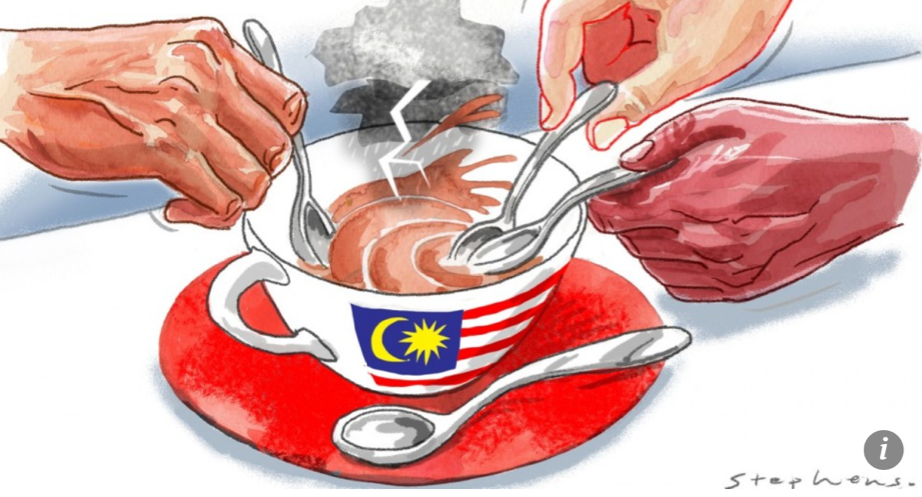 Derwin Pereira says while the electoral defeat of Najib Razak’s Barisan Nasional reflected a disgust with the status quo that cuts across the races, people still largely voted according to ethnic preferences, and the concept of Malay supremacy remains intact – for now.

Malaysia’s 14th general election was nothing less than a revolutionary storm in a constitutional teacup. Short of casting the Barisan Nasional (BN) physically into the seas after six decades of rule, voters consigned it to the parliamentary backwaters.

This month, Malaysia became part of the democratic trajectory of East Asia. Fed up with a ruling coalition that was corrupt beyond repentance, Malaysians upset the status quo and chose the opposition Pakatan Harapan alliance to give their country a new lease of life.

The most important aspect of the election is that the results reflected a disgust with the status quo that cuts across races. Ethnic sensitives have shaped politics in Malaysia ever since the country gained independence from Britain in 1957. The majority Malays, the economically powerful Chinese, Indians and other communities have never been integrated sufficiently to the point where they would not need separate political parties to represent their interests.

Instead, those interests are embedded in coalition politics. BN’s component parties reflect a rainbow of ethnic identities: the United Malays National Organisation (Umno), the Malaysian Chinese Association (MCA), the Malaysian Indian Congress (MIC) and others. At this election, Umno suffered severe setbacks while the MCA and MIC were nearly wiped off the electoral map.

Of course, power has only passed from a multiracial coalition to a multiracial alliance. The Pakatan Harapan includes the nominally multiracial but dominantly Malay Parti Keadilan Rakyat; the Parti Pribumi Bersatu Malaysia (Bersatu), another Malay party; and the Chinese-based Democratic Action Party (DAP). Bersatu is significant because it is led by Dr Mahathir Mohamad, Malaysia’s longest-serving premier, who returned to the political stage at the age of 92 to defeat the BN’s incumbent prime minister, Najib Razak.

In reality, Malaysia’s demographic status quo has not changed, although the electoral status quo is gone. Thus, a revolution in a constitutional teacup.

The pan-ethnic vote against the BN needs to be kept in sobering perspective. While the different races were united in voting against political rulers tarred by gross corruption and indifference to the needs of ordinary Malaysians, the races did not vote for one another. For example, a vote for Keadilan, to say nothing of one for Bersatu, did not necessarily dilute the concept of Malay supremacy, which is entrenched in the imagination of ethnic nationalists; and a vote for the DAP was one for and on behalf of the Chinese.

This ethnic affiliation is true of support for the BN as well, of course, and reinforces the point that Malaysian politics has not crossed the ethnic threshold.

If anything, the evidence points to the contrary. The resounding electoral victory of Parti Islam se-Malaysia (PAS), in its northern strongholds of Kelantan and Trengganu, underlines the visceral hold of ethnic politics on a substantial segment of the Malaysian population. The Islamic mobilisation of the Muslim masses can never be kept out of liberal democratic computations of the future of Malaysian democracy.

People sit next to a mural of the late Nik Abdul Aziz Nik Mat, the icon and spiritual leader of Party Islam Se-Malaysia (PAS), in Kota Bharu, Kelantan. PAS’ resounding electoral victory in its northern strongholds of Kelantan and Trengganu underlines the visceral hold of ethnic politics on a substantial segment of the Malaysian population.

We do not yet know if a new ethnic compact will emerge to replace the old. This is why it is not wrong to say that Malaysia has received a new lease of old political life – nothing more.

Of course, even incremental change is change. And one area where some change will be obvious is in the renewed sense of probity in public life.

Najib did not invent corruption but, under him, the scourge scaled heights hardly imagined before. The operations of the state investment fund, 1Malaysia Development Berhad (1MDB), demonstrated the workings of an out-of-control government.

The new Pakatan Harapan government won’t be an angel, but it will be careful not to indulge in the looting of national resources, something now associated with the BN.

Indonesia provides a useful parallel. While Suharto’s ouster did not end corruption, it limited the extent to which politicians could hope that the exercise of state power would protect them from eventual prosecution for national larceny. A culture of kleptocracy and immunity gave way to one of public scrutiny, demands for accountability, and compliance with the rule of law.

Jakarta marks the start of the 100-day countdown to the start of the Asian Games with a parade on May 13. Under President Joko Widodo, Indonesia is showing what political change can do. Gradually but genuinely, the country is winning its battle against corruption.

Under President Joko Widodo, Indonesia is showing what political change can do. Gradually but genuinely, corruption is being pushed from being an inexorable norm to being an unfortunate exception. Indonesia today is a much cleaner place than it was under the autocratic regime.

Another area of change involves civil society. It is a threat to both state and market when the two conspire to rob the people. In states governed by rapacious elite, civil society is demonised and consigned to the margins of political discourse. But it takes just one electoral upset for civil society activism to thrive again.

Maria Chin Abdullah, head of the electoral reform group Bersih 2.0, is embraced by her sons in 2016 after her release from detention. She was arrested ahead of a mass protest against the government and detained for 11 days. The electoral defeat of Barisan Nasional has invigorated civic groups like Bersih 2.0.

In Malaysia, the election has re-energised organisations such as the electoral reform group Bersih 2.0, whose public face is that of the activist Maria Chin Abdullah, and the Malaysian Bar Council, whose principled legal intransigence is well represented by its former president, Ambiga Sreenevasan. Once hounded by the defenders of the status quo, they have survived the political wilderness to once again become a watchdog of the state and market.

Malaysia’s new government will only hurt itself if it were to try to push these organisations back into the moral opposition. It is in Pakatan Harapan’s own, long-term interests to invite civil society to play its rightful part in the remaking of Malaysia.

Finally, Malaysia’s coming of age as a democracy represents a change in how citizens perceive themselves. No longer mere pawns of history, they have made history by getting rid of an unpopular government. Now, it remains to be seen how the new government keeps their trust.

On balance, Malaysia has got a new lease of old political life, but there is a hint of the early winds of change.

If the old order simply finds new clothes to wear, this would have been a wasted year. But if a new Malaysia emerges, the year would mark a true beginning.